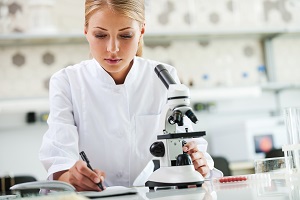 People with hypothyroidism have a thyroid hormone deficiency, symptom of a malfunctioning thyroid or a resistance of the tissues to the hormones in question. In the first case we speak of primary hypothyroidism (95% of cases), in the second of central hypothyroidism (5% of cases). The disease causes the slowing of metabolic processes, which results in tiredness, increased sensitivity to cold, difficulty concentrating. In children can also cause deficits in both physical and intellectual growth.

To make a diagnosis of hypothyroidism is to measure the thyroid hormones triiodothyronine and thyroxine in the blood: their deficits indicates difficulties in the functioning of the gland. Another symptom is an excess of thyroid-stimulating hormone (TSH) in the blood: TSH controls the secretion of hormones by the thyroid. When the thyroid is struggling to react to stimuli, the anterior pituitary releases more TSH in an attempt to "wake up" the thyroid.
There are three main types of hypothyroidism, depending on when it occurs and how it manifests: congenital, acquired and subclinical. As per the name, congenital hypothyroidism comes from childhood and is associated with altered thyroid if not its complete absence. Locate the disorder is often difficult, if not when the disease has already progressed and has become blatant. Children with congenital hypothyroidism in fact, tend to suffer from mental retardation, due to the abnormal development of the central nervous system. This and other problems, however, occur only when the child begins to grow. For this reason, many suggest to run on all neonates the dosage of TSH, FT3 and FT4, so as to intervene immediately with the right treatments.

The acquired hypothyroidism occurs in adulthood, often accompanied by a goiter. Due to the slowing of the metabolic functions of the cells, the body produces less energy and then tries to consume even less. Consequently slows down the mobile phone exchange, the body develops less heat and oxygenation of the tissues is more difficult. Resulting sensitivity to cold, dry skin, dry hair. Those suffering from hypothyroidism acquired also makes it hard to concentrate and depression problems, often accompanied by fatigue and drowsiness.

We talk about subclinical hypothyroidism when the thyroid damage are not apparent in clinical terms, while being continuous and progressive. Often the disorder is manifested after the age of 50, while being present for many years. According to many doctors, early intervention at a young age could prevent age-related problems, including changes in mental function.