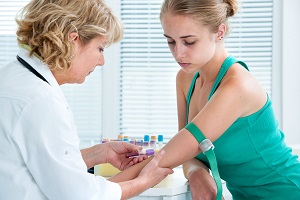 The Opitz syndrome is a rare genetic disorder that causes mental retardation and multiple congenital anomalies. It affects about 1 per 1 million and there are 40 known cases in the world. Those who suffer from it have eyes too far apart, broad nasal bridge, malformations in the larynx and pharynx. In male genital organs develop abnormally. These defects cause problems in swallowing and breathing and, sometimes, deficits in mental development.

Before the discovery of the University of Barcelona, ​​the only gene linked to the disease was MID1. The gene is on the X chromosome, so the disease is probably transmitted through the mother. Usually symptoms occur only in males, while females are mostly healthy carriers. Some of them have widely separated eyes, but nothing else. However, there are cases of autosomal dominant inheritance, where the mutated gene is dominant. It follows that the parent has a 50% chance of transmitting the disease to their children, both boys and girls.

To date, the diagnosis is made by observation of clinical features. Is there a genetic test for abnormalities MID1 gene, but some patients do not have the mutation. For this reason, the test is not quite value for prenatal diagnosis. The routine prenatal screening tests can, however, identify certain of its defects of the disease. If there are cases in the family, in addition, you can search for causing mutations in the fetal DNA by CVS.

The lack of knowledge of Opitz syndrome makes it difficult to draw decisive therapies. The 50% of children die from complications during childbirth. In the other 50% of cases, it agiscecontro the manifestations of the disease, so as to improve the quality of life of patients. Where necessary and possible, doctors recommend surgery to reduce defects. The reduction of some malformations may decrease some side symptoms, related to the respiratory system.