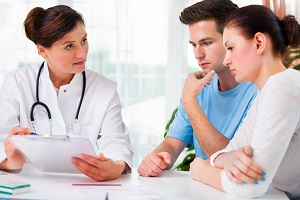 Huntington's disease is a hereditary neurodegenerative disease that affects about 5-10 / 100,000 individuals. Estimates are, however, partial, since diagnosis is often difficult and there are many unknowing males. In view of the variety of symptoms, only clinical observations are insufficient. The most effective diagnostic method also includes DNA testing and family history analysis.

The first symptoms of Huntington's disease appear generally between 35 and 50 years. Sometimes it also manifests itself before the age of 20. The disease causes progressive degeneration of neurons in some areas of the brain, leading to atrophy. The subject begins to manifest behavioral deficits, such as sudden mood changes, learning difficulties, depression, and anger rages. In some cases it changes calligraphy, has involuntary movements, and has disturbances in balance.
Depending on the person, the symptoms are also very different. In younger subjects, motor disorders begin to manifest and the symptoms progress rapidly. After 55 years, progression is slow and the symptoms tend to be confused with those of other pathologies.

Huntington's disease is linked to the mutation of the IT-15 gene in chromosome 4. The gene encodes the huntingtina protein, whose functions are still partially unknown. It is only known that it plays an important role in embryonic development and adult brain health. A subject with the mutated IT-15 gene has 50% of the chances of transmitting it to her children, who will develop the disease more or less prematurely.

Because it has a large number of symptoms, the diagnosis of the disease is mainly based on the genetic test. It's just a blood sampling of the subject to ascertain the presence of the mutated gene. It is a delicate decision, as it also involves close relatives as children and brothers. In fact, diagnosis occurs in adulthood, when many people have already had children who may have been transmitting the diseased gene.