During pregnancy is better to sleep on the side 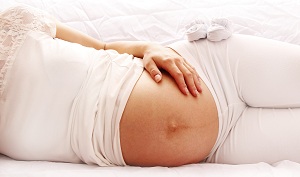 Sleeping on the back in the last stages of pregnancy could harm the fetus. It is revealed by a research at Auckland University. According to the researchers, the sleeping position influences the risks associated with childbirth.

The study involved 30 women between the 34th and 38th week of gestation, all in good health. In addition, cases of difficult pregnancies were examined, or where the fetus moved little. Fetal activity is in fact one of the indicators of the child's health. Previous studies have associated the lack of movement at a higher rate of dead fetuses.

Researchers monitored baby responses to mother's position changes during sleep. They used an infrared camera to record women during sleep. In the meantime, they monitored the heartbeat of mother and son. When the mother slept on her back, the fetus was less active than when she slept on her side. In the event of a change of position from the back to the back, the fetus stopped.

Peter Stone, one of the leading authors of the study, said the discovery could help especially in case of difficult pregnancy. If the doctor doubts the child's health, he or she may advise the mother to sleep on her side.