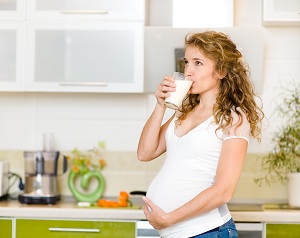 Drinking probiotic milk in pregnancy could reduce the risk of complications. This is suggested by a Norwegian study based on data from over 70,000 women. According to the study, this type of milk would help reduce inflammation, the risk of pre-eclampsia and premature delivery.

A team of Norwegian researchers examined responses to a survey about lifestyle in pregnancy. Among the questions there was also one concerning the consumption of probiotic milk before pregnancy and during. Probiotic milk is a milk enriched with good bacteria, such as Kefir milk. It is a very common food in northern countries and very consumed.

About 23% of women said they had consumed probiotic milk before pregnancy. 38% said they consumed it early in the pregnancy and 32% in the last. Average consumption was around 1.5 cups a day.

Women who consumed probiotic milk in the last stages of gestation had a 20% lower risk of preeclampsia. Consumption seems to have also benefited from the pressure and protein level in the urine, often too high towards the end of pregnancy. These women also had 21% less premature births.