Sleeping on the back hurts the fetus? 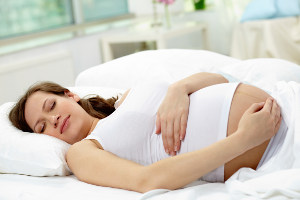 According to one New Zealand study, sleep on your back during pregnancy could harm the fetus. According to the researchers, the location would put the fetus under stress and increase the risk of miscarriage.

The data are preliminary, however. According to Hannah Knight, of the Royal College of Obstetricians and Gynaecologists, the data presented by the study are inconsistent and fail to connect maternal position and health of the fetus. So it is still early to give guidance on how to sleep to pregnant women.

Researchers at the University of Auckland have involved 29 women between week 35 and week 38 of pregnancy, all perfectly healthy. They have monitored their sleep belly up, belly down, on the left and on the right side by side. Women have held each position for 30 minutes. When women were sleeping on your back or on the right side, the fetus tended to fall into a state of drowsiness. In this condition, the fetus was using less oxygen, rather than when the women were sleeping on the left side.

According to the researchers, the position on the back would force the fetus to adapt to an oxygen decrease. This would increase the stress, and in the presence of additional stressors, it could in the long run hurt him. Also a similar study in 2011, conducted this time of 500 women, had estimated that 4 mothers who sleep on their backs in 1000 would incur in a miscarriage. An interesting, if comparison with the 2 women who sleep on the left side in 1000 who incur the same problem.

The study is still partial and preliminary. All women involved have terminated their pregnancy on time and without problems. For the moment, therefore, it is not to be concerned.