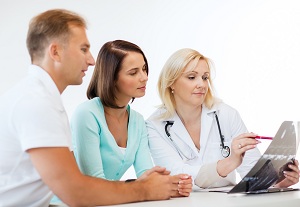 Phenylketonuclear syndrome or phenylketonuria is a genetic disease that affects metabolism. The sufferer shows an abnormality in the gene that codes for the enzyme phenylalanine-hydroxylase. As a result, the body can not convert the essential amino acid phenylalanine into tyrosine, a precursor of dopamine. Phenylalanine accumulates in the blood and tissues, causing deficiency of serotonin and dopamine. If not addressed in time, the phenylketonuclear syndrome causes severe mental retardation.

The disease is caused by mutations that affect the PAH gene and is transmitted in an autosomal recessive manner. Both parents must be healthy carriers of the disease and the child must inherit the abnormal gene from both. Benign hyperphenylalaninemia is a less severe form of the disease, in which a minimum level of enzyme is maintained.

The diagnosis of phenylketonuria starts from the Guthrie test or another similar test. It is done on newborns and requires only a drop of blood. It allows a quick and precise diagnosis, so as to allow immediate action with the necessary treatments. If there were already cases in the family, prenatal diagnosis can be made. However, for genetic analysis it is necessary to know the mutations involved in the specific case.

If detected immediately, the phenylchetonuric syndrome can be kept under control with a strict diet. Those who suffer must avoid proteins, so as to limit the intake of phenylalanine. This leaves very few foods on the list and makes it difficult to follow the diet, with serious consequences on the neuropsychological level.